In a pretty good piece on Brexit and Trumpism, in Salon, Ben Norton writes:

Liberals smugly blaming the Brexit vote on stupidity, making fun of working-class Leave supporters for (falsely) googling E.U. after the fact and actively downplaying the serious economic concerns behind the vote only further plays into right-wing hatred of elites.

It also conveniently absolves establishment liberals of responsibility for supporting policies that fueled the rise of the far-right.

We live in an incredibly dangerous moment. It is not hyperbolic to say Europe is going through political changes similar to those of the post-Depression 1930s, when fascism was on the rise for the first time.

Brexit is a big victory for neo-fascist forces throughout the West — actual neo-fascist parties and politicians. And there is no sign that the far-right will decline anytime soon.

Demagogues like Trump in the U.S., or Marine Le Pen in France, or Geert Wilders in the Netherlands, may lose the upcoming election, but there will be many more elections after that, and the far-right will only continue to gain strength — unless it faces a real challenge.

The problem is that neoliberals already know this – and don’t care. Austerity creates misery which in turn creates populism. Populism grows and splits into its left and right hemispheres, which buys the neoliberals more time (every moment of austerity makes them money, ratholed away in a Costa Rican bank). Eventually they will get their populist comeuppance, but all the neoliberals care about is from which direction; they’d of course like to never endure populism of any sort but they damn sure won’t tolerate it from the left.

Sanders was constantly smeared, roadblocked, cheated by the neoliberal centrists — and still almost won. Corbyn is getting the same treatment; his fate is unclear. Neoliberals consider populism of the left more dangerous than of the right, crushes or cheats it, allowing right populism to take root or even triumph. With Sanders out and Clinton’s victory in the general election highly likely, neoliberals have their preferred Worse Case Scenario: the only populist who could win is Trump, who is often described as a neo-, proto-, or crypto-fascist. It would be a major upset and neoliberals wouldn’t like it on cultural grounds, but they will make their deal with him and keep their precious low tax rates. Their bourgeois Lifestyle Liberal publicists in the media will be livid and histrionic, declaring every stupid-asshole thing Trump says the start of a pogrom, but they will get over it; after all, for the donor class these people are just the hired help.

Misery will deepen no matter who wins in November. Trump is a supply-side Reaganite with perhaps insincere Buchananite protectionist tendencies; HRC is a woke version of Thatcher, a warmongering austeritarian monster. Neoliberal economy will triumph either way. And the longer it continues, the uglier people will get. More and more will fall out of the middle class into poverty; more people will rob and steal from the remaining middle class just to make ends meet. More suicides, drug addiction, mass despair. Scapegoating, tribalism, and racism will be more extreme, widespread, mainstream. Terry Eagleton, a while back in The Guardian, described Zizek’s take on the same dynamic, though the context for them was the failed/thwarted Arab Spring revolutions:

One lesson of the Egyptian revolt, Žižek argues in Trouble in Paradise, is that if moderate liberal forces continue to ignore the radical left, “they will generate an unsurmountable fundamentalist wave”. Toppling tyrants, which all good liberals applaud, is simply a prelude to the hard work of radical social transformation, without which fundamentalism will return. In a world everywhere under the heel of capital, only radical politics can retrieve what is worth saving in the liberal legacy.

The neoliberal elite likes its cheap domestic immigrant help and social liberalism. They like the financial windfall from austeritarian policy more. They’d like to keep both and with HRC they will, but if they have to keep just one, their choice is obvious. And the people in another five or ten years of such conditions? Then will come the fascism, without any mitigating prefixes, nothing quasi about it – if, that is, we haven’t already all been killed in a war by then. 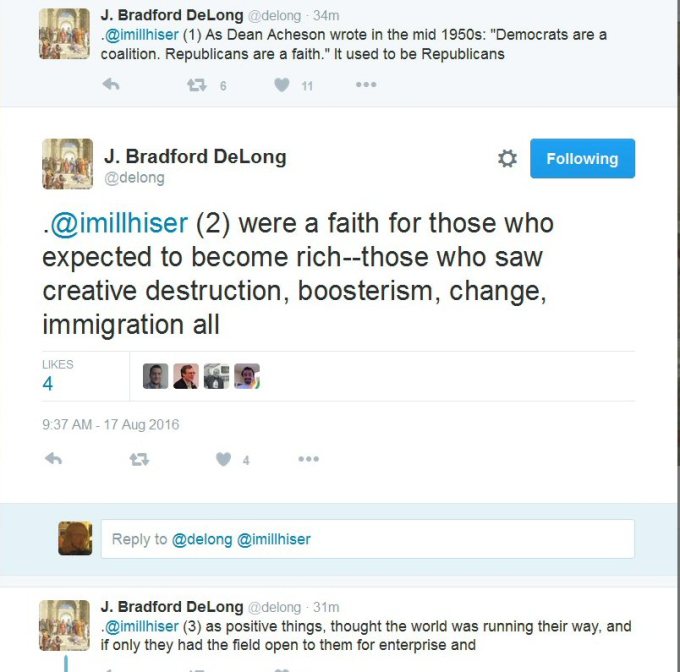 It’s not like that faith is gone with the wind. Someone still vehemently believes in all those classic Chamber of Commerce GOP things, plus trade deals and outsourcing (with social liberalism, too, in a minor difference); someone still hates the economic left with religious and eliminationist intensity; someone still praises business, growth, deregulation with sunshiney Reaganite enthusiasm and in total denial of the persistent corruption, failure, and moral bankruptcy of same; and that someone is the current neoliberal Democratic Party elite, of which Brad DeLong is a prominent member.

The Republican “grown-ups”, aka “moderates”, which [Reihan Salam, Kevin Drum, and Brad DeLong] long for left their Party a while back and took over the Democratic Party — which is now the Party of Moderate Republicanism. Compare John Anderson’s 1980 platform to the Dems of today and get a micrometer to measure the differences. The Drezner types and their admirers in the Democratic Party are upset because they fit into the Democrats’ corporate flank very nicely but feel uncomfortable cozying up to the working class. But they don’t like the cultural conservatives in the GOP, either. Poor boys!

Why not start their own party? They could all gather together and call it Sensible Cosmopolitan Elites for a Technocratic Future.

And here’s Norman Mailer making a similar observation, casting the migration of elites from Rs to Ds in terms of hostile/covert takeover and sabotage:

The Republicans said to themselves, ‘we’re in terrible trouble, they’re on to us, we’ve….got to send a few of our best people into the Democratic Party and get them to run it’ sort of as undercover people all these years. And I think they’ve succeeded. Look at the results.

The postelection corporation coddling, trade dealing, and labor crushing, with attendant austerity intensification program, in which the remnants of the American working and lower-middle classes’ wealth will be effectively transferred up to the global elite with a bit thrown down to the Chinese and Indian bourgies, will feel like classic, soul destroying, technocratic Rockefeller Republicanism because that’s what it basically is – cold stagflation style neoliberalism, carefully stripped of any national interest, but with a smiley, inclusive, mass migration-welcoming, diversity reflecting, human face. (The postelection hippie-punch from Clintonoids to Sanders supporters that DeLong himself telegraphed a few months ago, however, will be a GOP throwback of a different sort: pure Nixonism.)

Like Zizka told me years ago, Brad DeLong himself is the good Republican he’s always looking for. When DeLong mourns the old ‘respectable’ GOP it’s a gesture of piety in front of a mirror.

From BBC Panorama’s “Secrets of Scientology”:

John Sweeney: I am not a bigot.

John Sweeney: Calling me a bigot annoys me because I am not a bigot.

Ex-Scientologists: I understand that.

John Sweeney: Hold on a second–

Ex-Scientologists: But if I keep cutting you off like this I will actually drive you nuts. [cuts off Sweeney again and again]…every time you start to say something I cut you off, it’s another way of getting you – so that you become emotionally upset. It builds up like a dam: all these things you want to originate keep getting cut off, it builds up like a dam and finally explodes –

John Sweeney: It’s annoying– [cut off] I want to say something —

Ex-Scientologists: No! [crosstalk] Bigots are not allowed to talk!

Here’s the vid; quoted passage above begins at about 17m50s:

It’s normal that he flinches at that word: as a bourgie, educated member of the media elite, John Sweeney has been trained to believe being a bigot is the worst thing one can be, a zillion times worse than exploiter, robber, plutocrat, Big Liar, election stealer, torturer, torture enthusiast, war criminal, mass murderer (basically anything horrible but sexual assaultist and rapist) – not only the worst thing morally, but also potentially the most damaging to one’s career. Sweeney is genuinely horrified to be so accused and is indignant because he suspects his accusers operate in bad faith.

It’s fashionable to say that the language and techniques of social justice have been co-opted by the right – in the example above, the religious right, kooky division – but I’ve been tweeting that it’s better to say they have been counterco-opted back from SJWs and therefore returned to their natural home. That social justice has been recently confirmed as corporate, and often cynical, neoliberal identitarianism, perhaps it’s now best however to say they’ve always been in the same illiberal home, moving as it were from room to room. Someone should burn it all down to the fucking ground.

According to the Marxists online dictionary, the Girondins

were the representatives of the big bourgeoisie in the Convention of 1792-94, the Parliament set up to replace the monarchy. The Girondists were “the party of order,” vascillating between democratic measures and compromise with the Royalists….The Girondists were the party of orderly progress, sweetness and light the men who dreaded all violent, i.e., energetic measures[.] Such men, however well-intentioned they may be, must always in the long run become the tools of reaction from their timidity and hesitancy. The Girondists desired a doctrinaire republic, led by the professional middle-classes, the lawyers and literateurs….[they] favoured strictly middle-class republicanism, a timid and vacillating policy[.]

But the only admirable part in the description above, the non-violence, happens to be false. Even the article says some of them were active in the fighting of the revolution. But more to the point, their truly violent tendencies were directed outward. The following lecture is great in its entirety, but specifically beginning at about 23m, there’s a great description of the Girondins, who were


merchants, who were “in love with war,” believers in free trade and in “export[ing] revolution.” Then the lecturer quotes a fantastic passage against them by Robespiere:

The most extravagant idea that can arise in a politician’s head is to believe that it’s enough for a people to invade a foreign country, to make it adopt their laws and their constitution. No one loves armed missionaries. The Declaration of the Rights of Man is not a beam of sunlight that shines on all men, and it is not a lightning bolt which strikes every throne at the same time. I am far from claiming that our revolution will not influence the fate of the world, but I say that it will not be today.”